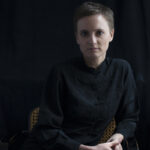 German artist Judith Stenneken works across many medias. We see this in her Tempelhof airport photography, sitting alongside video works, captured there on site. For the most part, her alluring works comment on political states and ideas of transitory spaces. Particularly, she uses them as means of expression of the state of flux and change. More over, Stenneken shines a light on the unresolved issues of immigration in Germany through her Tempelhof airport photography. She achieves this through documenting the derelict airport which, from 2010, houses refugees.

‘Last Call THF’ is a close up of the moment when change happens. Importantly, Stenneken makes us focus on the void that fills space when something is lost. Importantly, the images of the football captures a possibility of joy. It is also a simple, everyday object that becomes a symbol of simple pleasures.
In this works, and others from the same series, Stenneken portrays Berlin’s Tempelhof Central Airport. The iconic airport closed all operations in 2008. She first captures the images six month leading up to its shut down, and continues to revisit the place and the work.

‘I see this in the Syrian woman in Germany who, after she fled her war ridden country, is forced to shed her identity and to adapt to a new people, language and culture in order to survive. Or the ancient Greek temple, where workers, time and again, exchange its crumbling cubes of stone for new ones — a constant state of renewal. And the defunct airport in Berlin, characterised by layers of time, history and the people who passed through: Nazis, American Allies, passengers, film crews, tourists, refugees.’

I Just Want to Know My Daughter Better, 2019

What if my country then decides she can’t come in, do we meet in the ocean?, 2018

I Thought I would Sit Here and Look Out Over The Fjord for the Last Time, 2018

He gets Knots in His Tummy and Worries, Yeah. We Had Him At the Doctor a Few Times, 2018