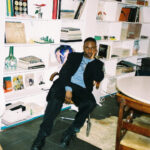 In his contemporary film ‘Water Blood-n-Bones’, artist Peter Spanjer predominantly challenges notions of performative masculinity. Compared to his later video work, this contemporary film is particularly intimate and shows a personal exploration. In short, he shows a vulnerability and honest presentation of ‘self’. For this particular video, Spanjer aims to resist the need for it to be seen, subsequently he intends the performance to exist without the presence of viewers. In turn, Spanjer came to a breakthrough moment in his artistic practice, and felt the film became a representation of himself in many ways.

Within his process, he creates his film work from a purely self-derived place, simultaneously forming these ideas devoid of research. ‘Water Blood-n-Bones’ is Spanjer’s first video piece where he portrays his own body, crucially this became an emblem of freedom for him, and a way in which his practice could progress. As a result, the visual narratives he forms in this video derive from personal experience.

“One of the biggest questions started with ‘Water Blood-n-Bones’ – the question of ‘who are you?’”

The London-based, Nigerian artist most often creates work based on ideas of resistance of emotional stereotypes placed on black men. As well as this, he focuses on the resisting of performing blackness to others, importantly allowing room for self exploration. Most often, this extends to his audience in the form of video and print work. Equally important, Spanjer’s practice primarily contains layers of sensuality and sexuality whilst also addressing fragility and softness. This can be traced to his personal battles with breaking away from strict gender roles within a black household.