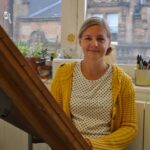 Rachel Duckhouse is a Glasgow based visual artist. She works primarily in printmaking and drawing. However, while making these works in spring 2020, she was unable to go to her studio and the print workshop was closed. She has therefore been forced to work at home and concentrate on making optical drawing during the pandemic.

Importantly, what drives Rachel in her work is the drawing of repeated shapes or lines. As well as this, the themes of repetition, layering, architectural structure and patterning. As her practice develops, in a way, these themes evolve into the starting point for several research based projects. Initially, these optical drawing projects have explored patterns, structures and repeated rhythms and flows found in all sorts of contexts. These include, for example, architecture, landscape, the flow of water and biological systems. In between these research based projects, she has above all continued to develop series of intuitively drawn pen and ink works.  Equally important, these are loosely informed by her wider research based practice, but driven instinctually.

This drawing is also part of a series of works she made after her RSA (Royal Scottish Academy) Residency. In the work, consequently, she depicts elements of the landscape seen during her walks in the Outer Hebrides, including the sheep fanks.