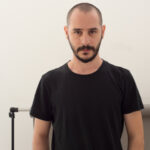 As part of his ‘Motel’ series, Greek artist Nikolas Ventourakis chooses rooms in LA Motels as the subject of his monochrome and colour urban photographs. ‘Untitled (Hair Dryer 2)’  in particular, depicts a seemingly mundane scene of a hair-drying fixture on a wall. Like much of his photographic work, in this series Ventourakis chooses to focus only on details within these scenes. Without the bigger picture, we as the viewer see a curated and emotive depiction from the artist.

Ventourakis took these photographs whilst in Los Angeles for his Fulbright Scholarship in 2014, and this series relates to his time in the US. Within these works, Ventourakis portrays domestic interiors steeped in photographic history. In this case, the details he captures come together as a reassembled room.

For his monochrome and colour urban photographs, ‘Untitled (Hair Dryer 2)’ subsequently becomes a projection of memory and stems from abstracted private experience. The work sits between being art and documentation, this in turn questions the status of the image. As an artist, he is fascinated with narrative and conclusion in his work, as well as evidence within photography. In his photographic series ‘Motel’, he leaves viewers to fill in missing blanks and take their own interpretation of the imagery.

Within his body of work, Ventourakis predominantly focuses on photographic narrative. At the centre of his practice, he explores themes of resolution and conclusion. In his photography, in addition he invites viewers into an abstracted and documented world. As the viewer, we can then decide what is recognisable and familiar.