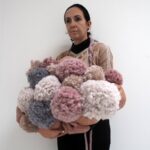 Artist Caro Halford often works in performance, video, sculpture, collage and photography. However, in her new historical collage series, Halford aims to address the absence of women in the arts historically. With this in mind, Halford investigates the British women printmakers in the Long Eighteenth Century in her historical collage work. In particular, she studies artists Angelica Kauffman (1741 – 1807) and Mary Moser (1744 – 1819) and their female contemporaries. Additionally, Halford focuses on these Royal Academicians Kauffman and Moser, who were overlooked female artists in a hugely male dominated world. In line with feminist ideals, subsequently Halford depicts these overlooked female artists thereby giving them their due status.

In ‘Alter Egos of Angelica I’, Halford depicts a elusive portrayal of who we assume to be Angelica Kauffman, partially concealed by a mirror-like form. Angelica Kauffman was a Swiss Neoclassical painter. Subsequently, she carved herself a successful career as a history painter, portraitist, as well as a landscape and decoration painter. However in this historical collage, Halford chooses a name that eludes to duplicity through an imagined alter ego for Kauffman.

As part of her new collage series, Halford bases her research into the overlooked women from the past, specifically the Lady Etchers. Most of all, she creates her new works as a result of extensive research into particular female artist’s pasts. In particular, in ‘Alter Egos of Angelica I’, Halford imagines a fictional meeting at the Spotlights Room on Angelica Kauffman at Tate Britain with Kauffman’s alter ego. Specifically, Halford uses the same blue backdrop in this piece as is used in these rooms at the Tate Britain.

Copper plate with collage and enamel paint and soap blocks

Acrylic and collage on paper