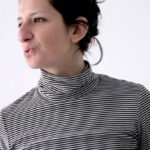 Italian artist Benedetta Panisson explores the relationship between sea and land in her photo series ‘People do water’ (2013-2019), depicted through black and white seascapes. However, the series eventually becomes a photographic archive portraying captured moments and interactions between people and water. In addition to this, Panisson focuses on the term ‘Hydrophilia’. This is a term that indicates the properties of an element, whilst also meaning ‘a sensual pleasure produced by physical contact with water’. Hence, in doing so, she re-interprets people’s physical union with the sea, in an attempt to displace the spatial ‘margins’ surrounding the body.

Usually, Panisson works with photography, video installation, live performance and drawing. Importantly, as part of her research, she dedicates her practice to exploring the aesthetics of sexuality. Ultimately, Panisson’s black and white seascapes are the result of meticulous processes. In the same way, she works to depict the union between photography and the aesthetics of sexuality. In particular, she concentrates her research on the sea as a ‘sexual metaphor’.