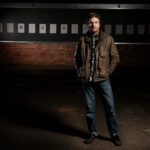 British artist Philip Gurrey, most of the time, explores history and politics in his art practice. He investigates through painting, initially, paying homage to specific historical movements and occurrences. Gurrey is influenced, importantly, by the contrast of the world we live in today. He bases his early work on the painted language of the Dutch golden age, in addition, he borrows directly from Rubens and Anthony van Dyck. Ultimately, Gurrey aims to sculpt a new vision of an age which saw power shifts, specifically, away from the King and religion, but towards trade and money. Historically considered by many as the birth of the modern society.

Equally important, Philip Gurrey uses the war photographer Percy Hennell’s works as his inspiration. He juxtaposes a number of Hennell’s photographs, simultaneously, into new imagery and, in many ways, he creates new non-existent personalities. Gurrey is inspired by those that have been scarred, battered and bruised from conflict. In particular, Gurrey uses these poignant images to scrape beneath the surface of the flesh and blood, eventually, he strives to depict a fresh vision of the human condition.

To summarise, Gurrey pulls together subject matter and medium. Eventually, he carefully attributes historical subjective and artistic associations to the works.

Oil and beeswax on board